Record breaking volatility has significantly altered trading and execution strategies, a series of webcasts hosted by Fund Business has heard.

These developments are not necessarily surprising – in volatile markets there is less conviction, meaning traders are less keen to put their all their trades in one basket.

Mateja Spat, Director Transaction Cost Analysis at IHS Markit in Singapore, said that between January and early April, IHS Markit clients trading in Australian market had increased their use of TWAP algorithms by a factor of eight (see figure 1): 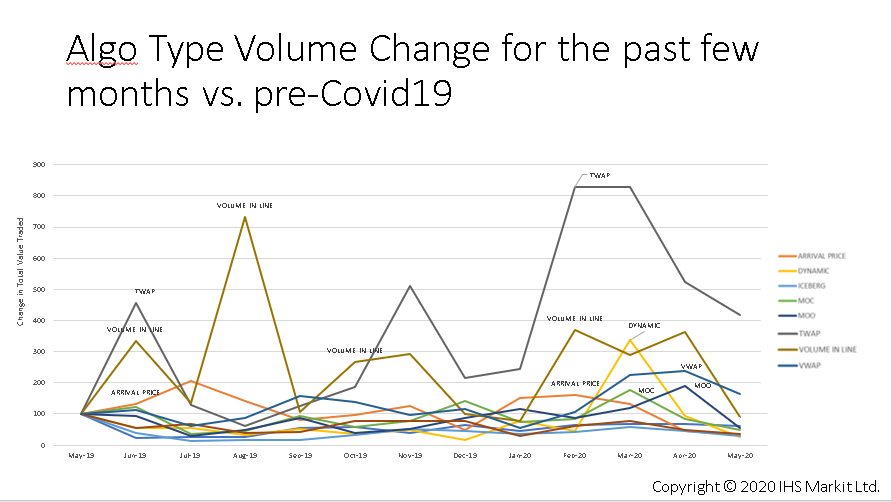 That included traders who wouldn’t ordinarily resort to TWAP algos, which are known for being a fairly basic strategy that’s not particularly sensitive to trade size or market conditions and is relatively easy to game. The aim of a TWAP algo is to achieve the time-weighted average price calculated from the time the order is submitted to the time it completes, essentially splitting the total transaction volume into a certain number of orders which it then seeks to fill at regular intervals over a prespecified time period. In that sense, TWAP algos are quite similar to VWAP algos, which also split the total position volume into small orders, but which look to match the volume weighted average price over a given period of time. It’s the ability to spread trading across the day that has made these types of algos more popular in recent times.

“The usage of algos has certainly changed. Reflecting the volatile times, you are more inclined to use an over the day style algorithm, whether it be a TWAP or a VWAP a touch more than you would use a dagger or a sniper,” Phil Cornet, Trader at Perennial Value Management, said. He said that in normal market circumstances, he wouldn’t generally use these types of algorithms except for very small trades where it would be hard to add any value.

That was also the experience for Janelle Manchee, Senior Equities Dealer at IFM Investors. “As a small-cap manager we are very loath to use a VWAP target or benchmark, but you are being forced to be spreading your orders more over the day than rather doing big block trades and getting set with an arrival price, given the trading costs that are associated with that at the moment,” Manchee said.

A more surprising finding was that there has also been a spike in the use of Volume Inline algorithms, which work orders in line with the volume by matching certain percentages of the overall orders of stock. The idea here is to beat the strike price by anticipating and adapting in real-time to the changing trading patterns in a stock. These algos work well for highly liquid stocks, but are harder to execute in periods of extreme volatility. “The use of Volume Inline is a bit of a surprise, as it is usually not that popular in periods of volatility. However, we can see that it did spike in February, it dropped again in March and again came back a little bit in April,” Spat said.

Finally, there has also been a jump in the use of dynamic algorithms. “That’s not surprising, as algorithms were being modified and questioned quite a lot over this period,” Spat said. She said that overall, IHS Markit had seen an increase in directed orders and less reliance on participant strategies. Stricter limits were applied to the orders and outlier thresholds widened over the course of the past few months.

Spreads widened too, as did market impact (figure 2): 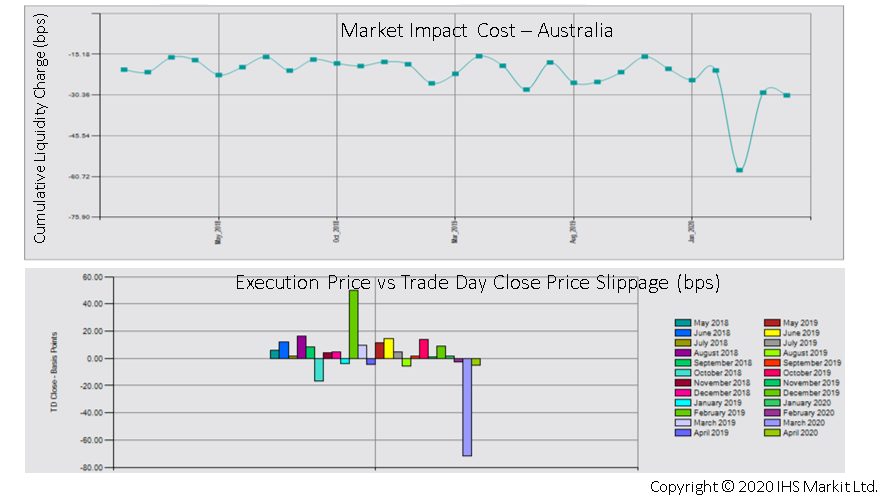 “If you look at the average execution price versus the trade day close we see the increase in negative slippage in March, and this was probably driven by the momentum and increased speed in which the price was moving away from the traders,” Spat said.

Cornet agreed trading costs had blown out significantly. “With the massive increase in volatility […] depending on what measurements you use, the costs of an order blew out between four to five times at the peak of the volatility in late March so yes, […] it has become more costly to trade and hence, decision making from the portfolio managers and the stock selection team is more important as well.”

Whether the decision by the Australian Securities and Investment Commission (ASIC) on March 16th to impose a temporary cap on the numbers of trades that brokers could execute had a measurable impact on spreads was hard to say. ASIC took the decision following a particularly large increase in executed trades on Friday 13th amid concerns that the backlog of trades was putting pressure on the processing and risk management capabilities of market infrastructure and market participants. For a period of weeks – the cap has recently been lifted – brokers were told to reduce their number of executed trades by 25% from the levels executed on Friday 13th of March.

The main impact appears to have been a drop in high frequency trading activity. Beyond that, Cornet said that a few brokers had tweaked some of the algorithms to allow for posting size to increase, which allowed them to decrease the number of trades in the market, but by and large, the actionable liquidity was still there. Whether it had contributed further to the increase in trading costs was hard to say.

“We saw the impact cost of the volatility and the widening of those spreads go up significantly, but I wouldn’t put it down to the ASIC response with regards to telling the top nine brokers that they needed to decrease the number of trades they were allowed to do. What it did was ensuring that a larger posting of volume was put into the market, even if it was at a slightly wider spread,” Cornet said.